Brennus Enemy of Rome (Brenno il nemico di Roma) is a 1963 Italian production featuring Gordon Mitchell, Ursula Davis, and Tony Kendall. The movie is directed by Giacomo Gentilomo who also directed movies such as the Last of the Vikings.

The movie is set during the Early Roman Republic and is about the Gaul invasion. As a reminder, in 400 B.C. the Gauls invaded Italy. They met the Roman army at the bank of the Allia river (10 miles north of Rome) in 390 B.C. and they defeated it. Then they entered the city and sacked it (many buildings were set on fire including the Royal Palace which housed all of Rome's archives).

The movie shows the invasion of hords of barbarians and Roman soldiers fighting and defending Rome. It starts it 391 B.C. when Brennus (Gordon Mitchell) and his troops take over the Roman town of Clusium. The Romans expecting the worst hurdle on one of the seven hills of Rome: the Capitoline Hill. Throughout the movie, there are convincing battle scenes, scenes of towns behind smouldered and fields full of massacred dead. There is also the scene of the Romans paying off Brennus with thousands of pounds of gold.

The Romans eventually manage to turn things around in part thanks to the courageous Quintus Fabius. Quintius Fabius (Tony Kendall) saves the beautiful Nissia (Ursula Davis) from Brennus. Nissia had been kidnapped and was to be married to the Gaulish chieftain. General Marcus Furius Camillus who had become a farmer returns to lead the Roman army. In history, the Gauls occupied Rome for seven months but eventually the Romans took up arms and managed to defeat the Gallic army.

Brennus Enemy of Rome: the only movie about the Gaul invasions

As far as we know, Brennus, Enemy of Rome is the only movie about the Gaul invasions in the 5th century B.C.. We like how the Gauls are accurately depicted in the movie including their costumes. The director Giacomo Gentilomo paid a lot of attention to historical details such as the clothing behind worn by the Gauls. On the negatives, the dubbing in English could have been better. 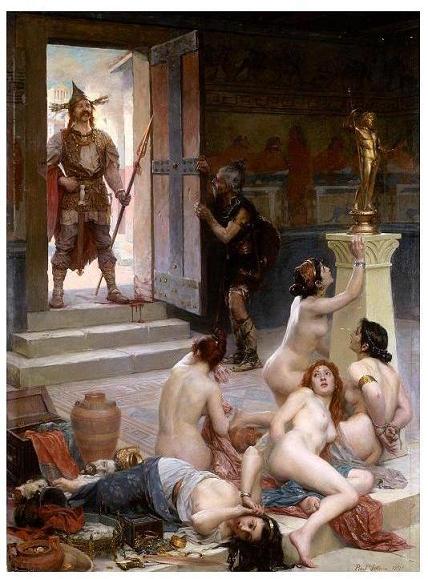 Return from Brennus Enemy of Rome to Ancient Rome Movies

Return from Brennus Enemy of Rome to Homepage