Roman mining was well ahead of its time. The Romans were the first to use sophisticated technology to mine for mineral deposits such as iron, copper, tin, lead or gold.

Iron had varied uses and was used to make tools and weapons. Tin and copper were used to make bronze. Silver and gold were used for jewelry and currency. Sometimes foreign policy decisions were based on the need for mineral resources. For example, Caesar invaded England in part to have access to the rich tin deposits in the country.

There were many forms of Roman mining the main forms being surface mining and deep-vein mining, surface mining being the most common. Romans would locate veins of minerals on the surface by unleashing a powerful flow of water. They would build aqueducts that sometimes could be very long to bring water from rivers and collect them in large tanks. Then the water would be released from the tanks, this method of Roman mining being known as hushing.

The aqueducts would also power machines used in Roman mining such as stamp-mills and trip-hammers used to crush the extracted ore into small pieces before further processing or to filter out precious metals such as gold.

The other method, deep-vein mining was more difficult, more expensive and more dangerous. It was only used to extract high value minerals such as silver and gold. Roman miners would dig a tunnel and a vertical shaft for ventilation and in order to extract the mineral. They did not have dynamite (invented by Nobel in 1867) but they would sometimes set a fire inside the tunnel to weaken the rock and extract the precious minerals. The fire-setting method was very dangerous as the tunnel could crumble and as the miners could die from asphyxia.

Roman miners used tools such as stone hammers weighing up to 10 pounds, wedges and pointed iron bars that they would strike with their hammers to break the rocks. They used wooden buckets to remove the ore, leather sacks and wore sandals and tunics with leather aprons for protection. They also had oil lamps as it would get very dark inside the tunnel. It is worth noting that miners would sometimes work almost naked when they were deep underground as the temperatures below could be quite high.

There are very few Roman mines that are still visible today. The most impressive and still visible sites include the Dolaucothi mines in England were Romans exploited the gold deposits and used aqueducts to bring water from far away rivers and streams. Another Roman mine is the Rio Tinto mine in Spain that was used to extract copper even though little as remained of it. 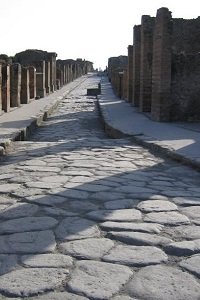 How Roman slaves were treated 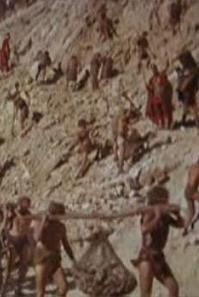 Return from Roman Mining to Homepage