The rape of Lucretia and the birth of the Roman Republic

Her name was Lucretia. She was a beautiful and virtuous woman and the wife of Lucius Tarquinius Collatinus, a Roman army commander. Everyone that knew her thought highly of her and appreciated her kindness, loyalty and beauty.

It is the 6th century BC and Lucius Tarquinius Superbus is the seventh and last king of Rome. Tarquinius Superbus or Tarquin the Proud (superbus in Latin means proud, arrogant, supercilious) came from a line of Etruscan kings that had ruled Rome for centuries. He was the son (or grandson) of Lucius Tarquinius Priscus, the fifth king of Rome and was married to the daughter of Servius Tullius, the sixth king of Rome: Servius Tullius had married his two daughters, Tullia Major and Tullia Minor, to Tarquin and to his brother Arruns respectively to prevent further conflicts in the monarchy. Tullia Minor was ambitious while her husband Arruns, that she came to hate, was not. So was Tarquin and together with Tullia Minor he conspired to murder his elder brother and his wife, Tullia Major. After the horrific murder of their siblings, Tarquin and Tullia Minor were married.

The ambitious Tullia then encouraged her husband to advance his position and persuaded him to usurp the throne by killing her very own father. It is said that upon returning from the senate house where her husband was finally declared king, towards the Urbian Hill, she saw her father's body lying on the street. In a frenzy, she seized the reins and drove her chariot's wheels over her father's corpse. Her father's blood splashed on the chariot and on her clothes.

Under Tarquin the Proud brutality and decadence flourished. Tarquin did not hesitate to use violence to maintain power. He disrespected the Senate and most Roman traditions. While he and his relatives devoted themselves to pleasure, his henchmen carried out campaigns of political murder to remove any and all opposition. Tarquin put to death a number of senators and significantly diminished the influence and authority of the Senate. The Romans who had come to accept the previous line of Etruscan kings, were beginning to hate everything that the Etruscans stood for. Resentment smoldered.

In 509 BC the king was at war with the Rutuli (from the ancient italic word "rudhuli" meaning "the blond ones"). The Rutuli were very wealthy and Tarquin wanted the spoils of war believing also that the booty would appease the Romans. Tarquin tried to conquer the town of Ardea the capital of the Rutuli (located 35 km or 22 miles southest of Rome), by storm. Unsuccessful in his attempt, he then laid siege of the town.

The rape of Lucretia

Army commander Lucius Tarquinius Collatinus was at the Roman military camp outside of Ardea during the siege. While common soldiers toiled with the camp's fortifications, he along with other young noblemen in the king's army spent time drinking and conversing. The subject of conversation turned to debating the virtues of their wives. Collatinus asserted that his wife Lucretia was the most dedicated of wives. The discussion became more and more heated and the young noblemen including the king's son Sextus Tarquinius decided to settle the debate by visiting each other's wives by surprise to determine which wife was the most virtuous. Visit after visit, the men discovered their wives enjoying themselves. When they entered Collatinus's home in Collatia late at night, they saw his wife Lucretia weaving with her maids in the lamplight in the hall of the house and mourning Collatinus' absence. Livy writes: "The prize of this contest in womanly virtues fell to Lucretia" (Ab Urbe Condita Libri Book I. LVII) Lucretia received the noblemen graciously. Sextus Tarquinius, the king's son and Collatinus' cousin noticed her beauty and virtue, which kindled in him the flame of desire. Livy writes: "It was there that Sextus Tarquinius was seized with a wicked desire to debauch Lucretia by force; not only her beauty, but her proved chastity as well, provoked him. " (Ab Urbe Condita Libri Book I. LVII)

A few days later, Sextus went back to Collatia and to... Lucretia while her husband was at the military camp in Ardea. She received Sextus graciously with all the hospitality expected to be given to the son of the king. Sextus waited until everyone in the house was asleep and, sword in hand, went to her bedroom. Full of desire, he woke Lucretia with his sword against her, threatening to kill her if she uttered a sound. He then declared his love for her and implored her to give herself to him. If she accepted his sexual advances, she would become his wife and future queen of Rome. When she refused, he threatened to kill her and one of her slaves and to tell everyone that he had seen her committing adultery with a slave. To spare her husband the disgrace threatened by Sextus, Lucretia finally submitted to his advances and Sextus proceeded to rape her.

Her eyes full of tears, she told them what had happened and asked for vengeance.

"Pledge me your solemn word that the adulterer shall not go unpunished."

The men tried to appease Lucretia's sorrow by telling her that what had happened was not her fault and by promising her to pursue Sextus. As they discussed the matter, the weeping Lucretia drew a dagger and stabbed herself in the heart. She died in the arms of her husband who kept kissing her and calling her name. Then Brutus grasped the bloody dagger and swore by Mars and all the other Roman gods that he would drive the Tarquins from Rome. He passed the dagger around and each mourner swore the same oath by it. Livy writes:

"By this blood, most chaste until a prince wronged it, I swear, and I take you, gods, to witness, that I will pursue Lucius Tarquinius Superbus and his wicked wife and all his children, with sword, with fire, aye with whatsoever violence I may; and that I will suffer neither them nor any other to be king of Rome!"(Ab Urbe Condita Libri Book I.LIX)

The birth of the Roman Republic

Lucretia's bloody corpse was paraded and taken to the Roman Forum where a crowd had gathered. Brutus as Tribune of the Celeres could summon the patrician families (curiae) at the Curiate Assembly (the comitia centuriata). The Curiate Assembly ratified the laws and decrees submitted by the king. There Brutus recounted the king's abuses of power and the various grievances of the people. He pointed out that king Tarquin the Proud came to rule by the murder of the previous king Servius Tullius who was also his wife's father. Brutus convinced the patrician families to abolish the monarchy and expel the Tarquins from all the territories of Rome. He debated with them the form of government that Rome ought to have going forward. It was decided that an interrex should be appointed until new magistrates were nominated and that a republican form of government with two consuls executing the will of the patrician senate should replace the monarchy. The affairs of Rome would belong to the people and Rome would become a res publica ("a public affair" in Latin), a republic. Rome would be ruled by laws and elected officials, by the Senate and the people of Rome:

Spurius Lucretius, Lucretia's father, was elected interrex being already prefect of the city and the Curiate Assembly voted on an interim constitution. Spurius Lucretius proposed Brutus and Collatinus, Lucretia's husband, as the first two consuls of Rome, a choice that was ratified by the assembly. It is worth noting that Brutus who was connected to the Tarquins, renounced all rights to the throne. Brutus was the son of Tarquinia the sister of Tarquin the Proud and the daughter of Rome's fifth king Lucius Tarquinius Priscus. Collatinus was a Tarquin as well: he was the son of Arruns Tarquinius, the former governor of Collatia, and Arruns Tarquinius was the nephew of the king. Because of this, Brutus later asked him to resign the consulship and to go into exile to be replaced by his father-in-law Spurius Lucretius. Later new magistracies were created further dividing the powers previously held by the king.

The tale of the rape of Lucretia kindled the flames of discontent over the Etruscan king's tyranical methods. Lucretia represented everything that the Romans thought they had and that the Etruscans did not: honor, virtue, bravery. With Lucretia's body displayed in the forum, Brutus made a speech to the plebeians. It began like this: Inasmuch as Tarquinius neither obtained the sovereignty in accordance with our ancestral customs and laws, nor, since he obtained it — in whatever manner he got it — has he been exercising it in an honourable or kingly manner, but has surpassed in insolence and lawlessness all the tyrants the world ever saw, we patricians met together and resolved to deprive him of his power, a thing we ought to have done long ago, but are doing now when a favourable opportunity has offered. And we have called you together, plebeians, in order to declare our own decision and then ask for your assistance in achieving liberty for our country (Dionysius of Halicarnassus, Roman Antiquities, Book IV.78).

Needing the assent of the populace, a general election was held. The vote was for the republic.

Tullia, the king's wife, saw the commotion from her palace and fearing for her life left Rome to the military camp of Ardea. Sextus Tarquinius fled to Gabii where he was later assassinated. When Tarquin the Proud learned about the uprising he abandoned Ardea and sought support from his allies in Etruria. The cities of Veii and Tarquinii sent him contingents and Tarquin prepared to march upon Rome. The king also sent ambassadors to the senate, officially to request the return of his personal property but in reality to undermine the authority of a number of Rome's leading men. When the plot was discovered, the consuls put to death those found guilty and Brutus was forced to condemn to death his two sons Titus and Tiberius who were part of the conspiracy.

Brutus formed a revolutionary army. Revolutionary soldiers blockaded the gates of Rome and some were sent to Collatia. He left the city to Lucretius and battled the king's army at the Battle of Silva Arasia. After painful losses sustained on both sides, the revolutionary army triumphed. Tarquin then turned to the Etruscan king of Clusium, Lars Porsena, who marched on Rome and who quickly withdrew after facing the Romans' fierce defence. In 498 BC (or 496 BC) Tarquin persuaded his son-in-law Octavius Mamilius, the princeps (prince) of Tusculum, to march on Rome to be defeated by the Romans. Tarquin later died in Cumae in 495 BC where he had taken refuge at the court of Aristodemus of Cumae.

The events following Lucretia's death reverberated for centuries. Never again would Rome see a hereditary king and paranoia against kings lasted for hundreds of years. Lucretia's rape has been the topic of numerous poems, plays, operas, and artworks including Shakespeare’s narrative poem "The Rape of Lucrece" and paintings by Botticelli and Titian. The rape of Lucretia is more than a story of violence against a woman and its consequences, it is the story of virtue vs. vice, honor vs. lack of it, and kindness vs. wickedness. It is about ancient Roman ideals and all that they mean, and an event which culminated with the birth of the Roman Republic. 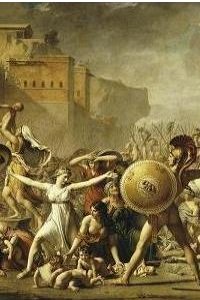 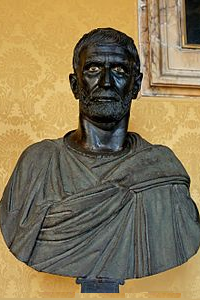 Return from The Rape of Lucretia to Homepage