The Roman money-changers or the argentarii were persons that exchanged foreign coins for Roman coins for a small fee. They existed from very early times as there were many nations in Italy and the Mediterranean and many different currencies used in transactions. They were the equivalent of bankers today. They usually had stalls or shops called the tabernae argentariae in the Roman Forum and they operated like a private business meaning that they were not working for the state.

It is worth noting that the shops or stalls were property of the state (they were built by the censors) and were rented to the money-changers. Also the money-changers were not many and they all belonged to a guild. They were members of corporations and they alone could admit new members. A member of a corporation was usually responsible for the other. There is still an arch at the forum boarium that can be seen today that symbolizes the guild of the money-changers.

To exchange foreign money for Roman money, the argentarii had to know the current value of foreign coins, noting that the value could fluctuate over time and by geographic location. In large transactions, the money-changers were often used to estimate the real value of foreign coins. They would also be used to detect fake coins.

The argentarii were not only in the business of exchanging foreign money for Roman money. Just like banks today, they also held money and sometimes they held very large sums of money! They paid interest on the money they held when they were allowed to use on profitable business transactions. The argentarii also loaned money for an interest.

Depositors would also use the argentarii to make payments. They had cheques called perscriptio that they would use to make these payments and the argentarii would then give the (depositor's) money in exchange for these cheques. The money-changers often acted as agents and were involved in many business transactions. For example, at auctions they acted as agents. They received a payment and recorded the date, price of the sale, product sold and name of the buyer, and then gave the money to the seller after a fee.

During the Empire, the argentarii had by law the obligation of purchasing the newly coined money from the mint and circulating it. All the accounts and bookkeeping were kept on codices or tabulae. These tabulae were used in courts to settle business disputes as the money-changers were often used in business transactions to make payments. 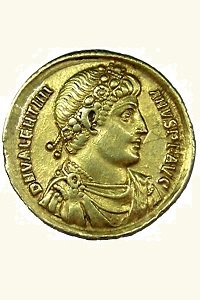 Return from Roman money-changers to Homepage